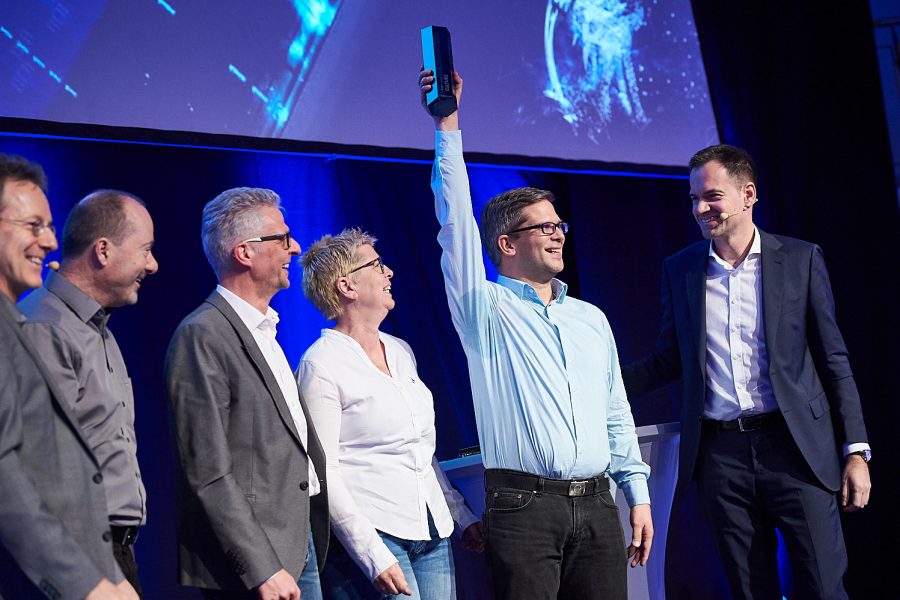 Setting up a project in collaboration with the client and the motivating experience of how well the collaboration went were the deciding factors for why our SAP development team submitted its “New Planning Project/Business Warehouse to SAP HANA” project for this year’s Change Award. And the effort was worth it – in March the team of Andreas Gstöttner, Helmut Schwarz, Karin Sampl and Günther Höllbacher were awarded with the prestigious accolade in the “Culture” category.

Setting up a project in collaboration with the client and the motivating experience of how well the collaboration went were the deciding factors for why our SAP development team submitted its New Planning Project/Business Warehouse to SAP HANA” project for this year’s Change Award. And the effort was worth it – in March the team of Andreas Gstöttner, Helmut Schwarz, Karin Sampl and Günther Höllbacher were awarded with the prestigious accolade in the Culture category. The Change Award highlights projects that particularly support the strategic repositioning of our company. This award-winning project was about modernising and streamlining Porsche Holding Salzburg’s planning process and placing it on a new footing. However, this is just one part of a whole series of projects relating to the financial future of our holding company. The starting point was the Business Warehouse, followed by planning and then reporting. With the help of a roadmap created together with SAP and Porsche Holding, the development of SAP was examined with regard to enterprise resource planning, the Business Warehouse and the planning module. Based on these findings, it was decided to change to SAP BWonHANA.

“Everything happens in the working memory”

SAP HANA is a new database technology from SAP that has been on the market for a number of years. It is different from other databases in terms of its structure and its so-called “in-memory technology”. The data to be analysed and processed is not just copied from the hard drive into the working memory, the database is imported into the working memory when the system boots up. From this point on, all access to the data is via the working memory. This leads to quicker data processing and, as a consequence, much shorter response times, which gives the HANA database a noticeable advantage in terms of speed. Furthermore, SAP HANA not only uses a hybrid model of row and column-oriented data access, it also compresses the data.
The Business Warehouse now accesses the HANA database, which is used for consolidating, planning and reporting. The faster database also improves the performance. This saves us a huge amount of time in the planning process. The Business Planning and Consolidation (BPC) module was newly implemented by SAP in addition to the existing consolidation module (SEM BCS).

“We have rethought the entire planning process with our developers”

The project thus covered two major aspects: On one hand, the Oracle database was converted to HANA, on the other hand, new planning processes were implemented. In addition to our SAP developers and the Finance Processes department at Porsche Holding, the company CNT was also involved in developing these processes, serving as an external advisor. Collaborating with this company has proven to be worthwhile on previous occasions, and this time they helped us with their specific BPC knowledge.
A key feature of the project was the organisation in co-creation with an agile approach. Right from the beginning, our colleagues in Group Controlling and Group Accounting were involved in the technical implementation. The relevant technical and functional aspects were discussed in the weekly meetings held with all participants, which allowed us to react swiftly to new developments. Additionally, so-called “retros” were held every two or three months. These review meetings come from the scrum model for project management and serve as an opportunity to look back at what has been done so far. This way, both the developers of Porsche Informatik as well as the experts from the different areas could benefit from gaining a valuable insight in the work being done by the other side during the course of the implementation.

The project was completed in mid-June. The result for the users is a customised add-in for Microsoft Excel that accesses the Business Warehouse system. The expected figures, such as income and expenses that are planned for the relevant period, are entered into the Excel sheet. This can be several months, or even years. The tool then uses this data to calculate the expected future values. It takes different scenarios into consideration as well, for instance changes in the markets. What would happen for example if a market collapsed, if suddenly people stopped buying cars in a particular country? This tool can be used to estimate possible impacts on Porsche Holding. The HANA database makes it possible for the first time to evaluate these different scenarios. Its speed allows for a ten-year plan to be calculated in a few minutes, where previously it would have taken hours.
In the end, the entire planning process in the holding company was completely redesigned. Now, everything from cost centre planning to budget planning to strategic planning can be found in one single interface. All processes are now bundled in a newly designed, user-friendly, transparent tool. This makes things significantly easier for users – a fact that has been confirmed by their feedback.

“That was the planning stage. Now it’s time for reporting.”

The first future finance project was barely finished before we began with the next one. Now that the Business Warehouse system has been designed and implemented as an intuitive process for the user, next on the agenda will be to create a business intelligence centre. This involves redesigning the entire Group reporting for all companies and using the Business Warehouse system as a “single source of truth”. That means the BW system with its HANA technology is to be the only data source across the Group, whether for preparing operative or management reports.
This project is already well underway, and we are currently analysing how SAP and other systems can best be linked to the Business Warehouse, as well as how they should be structured and how data procurement from these systems should work.
Once again, key players will be Group Controlling and Finance Processes, along with CNT as external advisors. The project will also follow the same tried-and-tested methods as the one that has already been completed, i.e. with co-creation and set weekly meetings. The dates for the meetings have already been fixed – the project team is motivated and ready for new experiences.

The Change Award in the Culture category, which the team received for this project in March 2019, is a major endorsement of the work it has done. On the one hand, the jury was convinced that a new culture of cooperation had been established between the finance departments and the SAP team based on co-creation, and on the other hand, it was particularly convinced that the new HANA technology and the significantly quicker access to data will enable a new culture of planning for the whole company, based on value drivers. This project was also honoured by SAP with the Quality Award. The prize will be awarded at the Palais Coburg in Vienna on 10 September 2019.
Developing the system together with all participants paid off. Regular meetings and discussions created a feeling of being part of a team, and the division between Porsche Informatik and the specialist departments which was often present in previous years was eliminated. Every success was achieved together – and celebrated together at the end. Colleagues from Group Controlling played a key role in this. Due to their specialist knowledge, they functioned as supervisors.
Johann Lechner, Head of Group Finance at Porsche Holding, was not just impressed with the end result – he also admired how the project was handled and the close cooperation. Meeting the approval of Group management in particular is a solid foundation to build upon for future projects.

Department head of SAP Norbert Reichl, principal Johann Lechner and Philip Mandorfer, project manager of the planning process of the department, are pleased with our team over the Change Award.

« Jill of all trades
Fresh ideas through innovation management »
archive